Other constraints
Field record and sample data can be used as indices to data locations. Structural data are not useable without reference to original notebooks by users unfamiliar with the geology of the East Grampians. The data are non-confidential, but the structural data specifically require very considerable care in their use, they can only be interpreted sensibly in conjunction with the original paper records.

Additional information
Data entry lapsed after 1992. The East Grampians field data are mainly structural measurements without any supporting descriptive context, and the context is essential if the data are to be correctly interpreted. They are best regarded as a digital copy of paper field records and need to be used together with notebooks and fieldslips. The data were collected in this form in parallel with developments in the databasing of geological information in BGS. The aim was to try and provide rapid access to field data collected by a number of geologists over a wide area. Stations are located by British National Grid coordinates to the nearest 10m, estimated; the data predate the use of hand-held GPS in the field and so were located by conventional survey methods, such as fixing on topographical/cultural features, or by basic compass triangulation. Such a link with lithostratigraphy might now be possible via GIS processing using DigMap data in conjunction with this database. Lack of funds preclude this development at present. The data are stand-alone, but it may now be possible to link these data with other, corporate, datasets, such as DigMapGB. Data were originally collected by a number of Highlands geologists. The data were managed by C Thomas. After data entry into text files, data were validated against the originals by the geologist before they were loaded to a relational database (MIMER, then ORACLE).

Statement
The database contains basic tabulated field data resulting from the work of the BGS East Grampians Project in the early 1980s to mid 1990s. Data entry is to ASCII files, followed by geologists validation and editing by data manager. Once edited the data are loaded into a relational database management system (RDBMS). 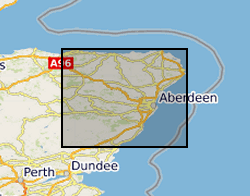